“I’m hoping to have my first maze book self-published before 2013”. – Eric Eckert 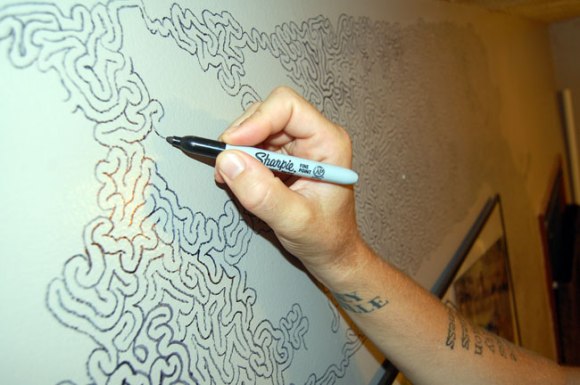 After years attempting learn I have resulted to accepting the fact that either you can draw or you can’t draw! I’ve tried to learn, to trace, even dot to dot! With no success I must say the talent to be able to draw is something I wouldn’t mind showing off. My brothers can both draw; I see it quite unfair that even my stick men come out on the unimpressive side! So when I see drawings I get really happy, especially when people are creative with it. And that is just what I found!

On my search for talent, I came across a maze artist. After checking out some of the people he incorporated in his designs I showed a few family members and they were just as impressed as me. You may not believe it but I actually used to do this but they were never solvable just patterned maze looking images. I couldn’t draw so couldn’t incorporate anything but lines, this guy is a legend to me! That’s when I decided I really wanted him featured in my blog! He is so cool! So ladies and gentlemen put your hands together for ‘another talented individual’ expressing themselves! 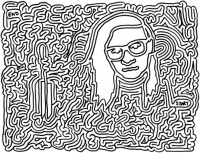 Can You spot the celebrity?

Eric Eckert Has lived in Nebraska his entire life.  He began drawing mazes at age 7 and hasn’t stopped since.  He currently draw’s mazes with people’s faces in them and have gotten some good responses from celebrities like Kevin Smith, Morgan Spurlock and Andy Richter.

Eric Even made us an Exclusive another Fly on the Wall Maze!! Can you solve it?

What made you start drawing mazes? What inspired you?

“I was in an after-school program when I was in first grade.  All the kids would sit and colour or do crafts and one day I saw a kid drawing mazes.  I asked him how he was doing it and he showed me.  Those mazes were pretty simple then.  I continued drawing over the years and continued to challenge myself to make them more complicated.  I loved the feeling of making them really difficult and then having my friends try and solve them.  Most of the time they would give up after a very short time.

Then a year and a half ago, I started working with the idea of putting people’s faces into the mazes.  I was looking for a way to get my mazes out there and get some recognition.  Through the use of Twitter and making celebrity face mazes, I’ve gotten some great responses and have a lot of people enjoying my mazes.”

What do you plan to do with this talent in the near future?

“I am hoping to have my first maze book self-published before 2013 and my goal is to have a real publisher pick up the book.”

Aside from photography, what are some other hobbies or interests you have?

“I have a wife and 2 daughters and spend my time camping, skateboarding and shooting films”.

One of my 30 goals in 30 years was to cover my office walls in a solvable maze.http://yntsites.com/30in30/office-maze/

Check Out The Time Lapse Video:

Check him out Online at: